Micro-frontends are the present and the future for scaling large client-side applications. Why should you implement this architectural style? Let’s dig into the reasons that led me and my team to adopt it.

Working at scale is one of the main goals of modern software engineering. Micro-frontends is an architectural style and a technique many organizations are adopting to address this problem. Generally speaking, the motivations for using this approach are basically the same that makes us choose micro-services in the “backend” world: breaking down a monolithic codebase into micro-apps, each of which developed by autonomous team, responsible for the entire lifecycle of this portion of the project.

This approach has the main benefits of improving the development process and the developer experience, because each team is focused on a smaller scope and it can independently deploy new features adapting to changes with a high velocity. In other words, micro-frontends inherit microservices well-known benefits such as development agility, technological freedom, and targeted deployments.

We pay for this high encapsulation of business rules and this high flexibility for each team with an increased effort for infrastructure since automation is one of the key requirements for a successful implementation. Modern cloud technologies greatly simplify this work and can be considered the enabling technologies for this architectural style. Despite this, a distributed system is intrinsically more complex than a monolithic one, because we must take in consideration aspects such as orchestration, distributed failures, observability, and automated deployments.

For the purpose of the article, we can consider our initial architecture as a classic client-server application where the PHP server is responsible for generating HTML pages and JavaScript client side code is responsible for making these pages interactive. We need to evolve the user experience making the user interface more responsive and more app-like. We also need to improve the developer experience because maintaining this legacy codebase has become overwhelming and the team was not so fast to adapt to ever evolving requirements. The final objective of this architecture migration is to improve the user experience, modernize the user interface and speed up the development process, and we would achieve this purpose satisfying the following objectives:

As it often happens in software engineering, every choice comes at a cost or at least with some aspects to take into consideration. Choosing a micro-frontends architecture requires facing these challenges.

First of all, let’s briefly describe the application domain which is useful to understand our choices.

Nuvola is a web application that offers a range of services that fully cover the needs of schools, from teaching to administration. Teachers use the software for teaching management, insert lesson topics, assignments, grades, absences, etc. Instead, the primary purpose for parents and pupils is to read the data entered by the teachers. Finally, the school secretariat uses it to fulfill administrative burdens, registration of documents, communications, personnel management, etc.

The core concept is to apply a Strangler Pattern in order to gradually eliminate the original application by replacing each sub-domain with a micro-frontend. Adopting the Pattern in combination with a micro-frontends architecture can enable the frontend team to independently deploy each application module and increase the parallelism of development. 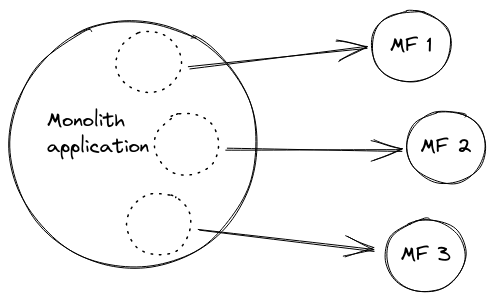 We followed the Micro-frontends Decision Framework as a guide for top-level architectural choices. This is a super-short summary of our decisions.

The following diagram shows a simplified version of the micro-frontends that will replace the monolith.

We chose to attach parent and child using a run-time integration via javascript because it’s one of the most flexible ways to do that. Each micro-frontend exposes an entry point and a rendering function. The app shell knows the list of entry points of the available micro-frontends and is responsible for loading them on the page.

This example is a basic implementation of the app shell. Once the micro-frontend is loaded on the page it renders the corresponding content. In our configuration, the app shell does not render anything: it’s only responsibility is to load and orchestrate micro-frontends.

Full disclosure: at the time of writing, each micro frontend is served by separate HTML pages, and the server is responsible for redirecting the user to the corresponding micro frontend HTML. Future release, will adopt the implementation described previously.

A side note on assets caching

A popular performance optimization technique for serving static assets is to set a long cache expiration time and generate dynamic file names by including the content hash. When connecting micro-frontends together, their entrypoint must be stable and can’t be dynamically generated with the content hash algorithm. So the solution we adopted is to generate a manifest file which maps the micro-frontend name with the dynamic name of the entry point. The manifest file must never be cached or, at most, it can be saved in a shared cache (CDN) that we can invalidate at each deployment.

On 10/10/2020, Webpack 5 was released. We are already distributing our first version of the micro-frontends solution based on the code previously presented. However This release is shipped with the Module Federation plugin which abstracts the parent child integration in a very effective way. Being a Wepack plugin, we just upgraded Webpack to version 5 and we were ready to use it.

Put it simply,  Module Federation allows to assign to each module the role of host or remote.

There’s a lot more things going on but this is the core concept. For instance, Module Federation allows each module to be both remote and host at the same time or can handle shared libraries avoiding the user downloading shared libraries multiple times when it is a dependency of many micro-frontends on the page.

Here’s an example of configuration for a remote module.

This configuration declares a remote entry for a module called RemoteApp that exposes a renderMFE function. Moreover, it declares two shared libraries react, and react-dom.

It could seem counterproductive to share something between micro-frontends, instead, avoiding a multi-framework approach keeps the project more cohesive and more maintainable. However, we know this is a very valuable possibility because we probably need it during further steps of migration to allow the coexistence of jQuery and React, for the small period of time we need to completely migrate our codebase.

At the time of writing this article, we have completed the migration of the parents and pupils area and we have noticed an increase in the use of this section by our users. This for us means that the update has been well received and has fixed at least some of the usability issues that made it less user-friendly. Secondly, we have seen a relative reduction in the cost of our cloud architecture due to adopting the API model compared to generating HTML on our main servers. Infrastructure costs have grown in absolute terms due to two factors. Our user base is constantly growing, more and more schools are choosing to use Nuvola as a management software and as an electronic register. The advent of the COVID-19 pandemic has generated greater use of our software which has represented the official software solution for communicating with schools during the distance learning period.

Given the excellent results obtained, we are already working on the migration of the other parts of the software using the same principles already implemented. Surely Webpack Module Federation will play a key role in this process and will be used for an even simpler and more immediate orchestration.

Thanks for reading so far, I will share more details of our journey in future posts. Keep following us on our blog.

Mirco Bellagamba is a software engineer dealing with front-end web development and mobile applications. Software architectures, modern web technologies, microservices are some of the IT topics he is most interested in.